I want in for FREE
Mission, Vision, Values
Vision Statements

Success hinges on your willingness to create a proactive strategy rather than one that is reactive. Preparing for and embracing change keep organizations thriving. You’ve got to have vision for the future.

During a recent facilitation, we observed this notion as the City of Reno prepared the new vision for their community. In the midst of economic diversification and growth, Reno is being proactive to prepare for a change in population and culture.

The greater Reno, Nevada area is becoming a manufacturing, distribution, arts, and technology hub due in part to Nevada’s attractive tax laws. Combined with the annual Burning Man Festival and the growing University system has resulted in a diverse and robust culture attracting the likes of Amazon, Apple, and Tesla’s multi-billion dollar Gigafactory. The problem? Reno’s aging infrastructure needs some love to support the new growth.

Reno set out to create a new vision for their future, but faced challenges creating one which reflects the wants of both citizens and the council. Here’s how they did it: 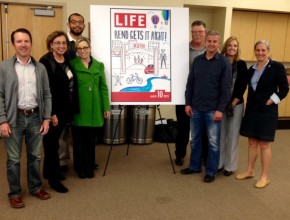 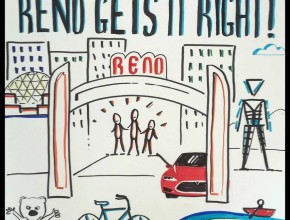 The resulting vision exercise from the retreat gave them the headline, “Reno Got It Right.” In fact, we brought in our own illustrator to draw on a poster-sized version of the Life Magazine cover. It was a huge accomplishment to have the council both excited and aligned on the new vision of our home city.

While unconventional, Reno’s visioning exercise made it easy for them to see what they want to be in 10 years. With an aligned staff and community, we’re moving forward to develop a plan that is proactive rather than reactive to achieve their vision.

For a deep dive on Vision Statements, check out our post on all things vision.

All fields are required.
Erica
Olsen

Join 60,000 other leaders engaged in transforming their organizations.

Subscribe to get the latest agile strategy best practices, free guides, case studies, and videos in your inbox every week.